Like no other time in my life, I stared into the eyes of a terrified animal incarnation. With mistrust and skepticism evident in his gaze, he looked as if he had been generally uncared for and in a state of ill health despite having just run strong for his life. His coat appeared matted and he was dirty but somehow I could see beauty and grace thriving underneath the dismay.

His escape, in Queens, NY, took place as he was being unloaded to a live market, the supposed to be last stop of his life. A live market is a place where people can purchase animals to be slaughtered on the spot so they can bring home their flesh and consume as a normal part of their day.

But not on this day and not this beautiful bull. Instead, this divine being ran for his life while quickly making his way to mainstream media and in an instant, by acting on his innate will to live, became someone instead of something.

Within moments of his break he was talked about by the most unexpected of folk on the most unexpected of channels bringing a face to the American dinner plate. Misunderstood as a wild, aggressive beast, this young bull was surely frightened and acting quite similar to the way a person would react in the same situation.

A champion of himself, he became known as Frank and his bravery would soon pay him back in spades. Farm Sanctuary was alerted and with the help of other animal advocates, in an effort to quell his fears, his safety as a righteous being was secured.

A deep burning in the center of my chest and a painful lump in my throat persisted as I zoomed in on the computer to get a closer look of his post-rescue pictures. My eyes locked on his, I sat still in commitment to feel everything. It was the energy of fear that hit me the hardest, identified as a heavy, stabbing pain beneath my sternum. Tears fell from my face and collected in a pool within the crooks of my elbows as I sat victorious, not just for Frank but for me.

No other time in my life had I been able to be still in the face of such intensity. Looking away and pulling down the veil of denial was the protocol of my past. Before it was simply too much to bear, but today there was something about this handsome bull that captured my strength to heal what I had hardened by participating in the carnistic world I was born into many years ago.

As I imagined the darkness of where he had been in his travels, the temperature of my blood lowered and I shivered in the wake of this terror. And now there would be no more terror to endure, he was safe and was heading towards his future of freedom.

I spoke to him as if he were right next to me. In those moments, there were no animals or humans, no me or you, right or wrong. There was only one and I embodied him as my equal. Looking away, as I had done so many times before, no longer felt appropriate.

As Frank freed himself, I have freed myself by no longer eating the fear, sadness, illness and captive energy of dead animals. I have opened the space to uncover the empathy that eating animals requires us to suppress and I have sat in the terror of these animals by educating myself and refusing to turn a blind eye to the reality of their daily horror.

According to a recent talk I attended with Dr. Will Tuttle, it is approximately 75 million animals per day in the US, that are slaughtered for food. And if we were to line up the amount of fish we catch and kill every year it would stretch to the sun. Estimates are that by the year 2048, there will be no more fish in the water to catch, kill and consume.

In the hours following Frank’s escape and rescue, more photos and video were released. I sensed resiliency as I watched Frank connect in with Tracey Stewart as she assured him of his safety. I believe he knew then that something had shifted. I ached for his relief, celebrated his security and knew that he would learn to trust again.

Space for his well-being was already opened at Farm Sanctuary in Watkins Glen and following his stay at Cornell where he was treated for wounds caused by being shot with tranquilizer darts and a diagnosis of pneumonia, he would graze in open pastures amongst new friends. Once his blood work was up to par and the darts were removed, he was transported from the hospital to his forever home on the farm.

And just a few days ago on that very farm I locked eyes with Frank again, this time in person, being to being. 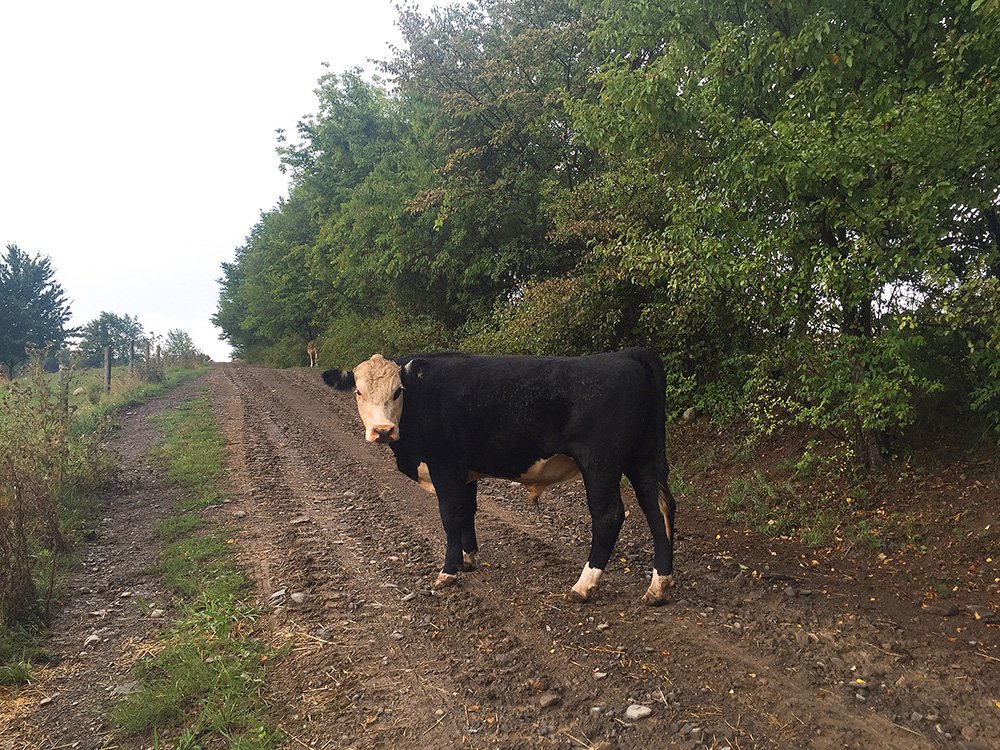 After six days of gazing up the hill to the cattle pastures with hope of catching a glimpse of Frank, our new friend Kevin, Farm Sanctuary staff member, walked us up the dirt road to mingle with the main herd. As we approached the gate, a small black bull turned around and showed his white face revealing the quaff of hair between his ears and single eye encircled in black which confirmed my hope that this being was in fact Frank.

We stepped onto his turf and walked up the road together as the herd followed. We chatted up and gave love to different herd members, Travolta, Sonny and others, and then out of the corner of my eye I could see that Frank was coming my way. I turned to greet him and with my hand outstretched he offered me his touch, an act that completed a circle of experience for me that will never be forgotten.

Animals like Frank and instances like his great escape are no mistake. I believe they are messengers sent for us to pay closer attention to the realities of our world and what is required by us to be a part of the violence that reigns in so many areas of our existence.

We live within a sea of inherently loving humans who live blind to the truth of everyday animal horrors. I hold strong in the stance that the blatant yet unwitting support of maintaining this veil of denial, as so many of our people fall ill to the fate of eating these animals, is the basis for unrest within ourselves and our world.

It is a long perpetuated myth that we must consume animals for our health and well being. To study the mountain of evidence opposing this conditioned ideal and embodying the plethora of educational resources on moving away from an animal based diet is the first step to healing ourselves and the world.

The Smart Athlete: Recovery and Nutrition